Kaposi’s sarcoma–associated herpesvirus (KSHV) is a gammaherpesvirus that is the etiological agent of the endothelial cell cancer Kaposi’s sarcoma (KS) and 2 B cell lymphoproliferative disorders, primary effusion lymphoma (PEL) and multicentric Castleman’s disease (MCD). KSHV ORF36, also known as viral protein kinase (vPK), is a viral serine/threonine kinase. We previously reported that KSHV vPK enhances cell proliferation and mimics cellular S6 kinase to phosphorylate ribosomal protein S6, a protein involved in protein synthesis. We created a mouse model to analyze the function of vPK in vivo. We believe this is the first mouse tumor model of a viral kinase encoded by a pathogenic human virus. We observed increased B cell activation in the vPK transgenic mice compared with normal mice. We also found that, over time, vPK transgenic mice developed a B cell hyperproliferative disorder and/or a high-grade B cell non-Hodgkin lymphoma at a greatly increased incidence compared with littermate controls. This mouse model shows that a viral protein kinase is capable of promoting B cell activation and proliferation as well as augmenting lymphomagenesis in vivo and may therefore contribute to the development of viral cancers. 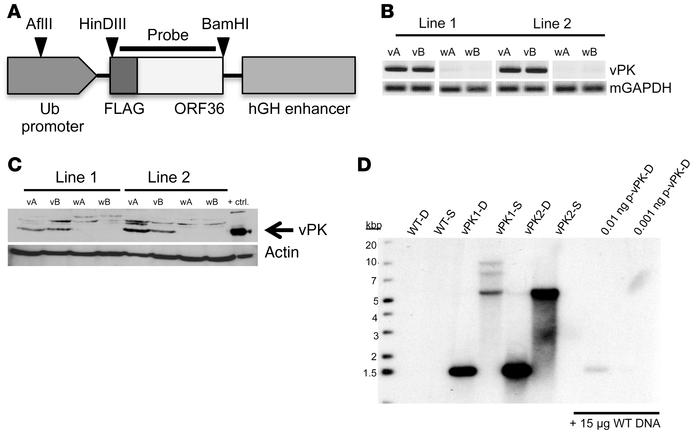 FLAG-tagged vPK was cloned, using HinDIII-HF and BamHI-HF, into a plasmid containing a Ub- and hGH-stabilization element. The linearized transgene fragment was microinjected into the embryos of C57BL/6 mice and implanted into pseudopregnant female mice. Each vPK line was developed from breeding a vPK founder to a C57BL/6 mouse. () Schematic of the linearized construct used to generate the vPK transgenic mice, as well as the cut sites and probe for the Southern blot in . () DNA from the tails of 2 WT (wA and wB) and 2 vPK transgenic mice (vA and vB) for lines 1 and 2 was isolated and evaluated by PCR for the vPK transgene. () Expression of vPK protein in lysates from spleens of the mice in as determined by SDS-PAGE and Western blot. Lysate from HEK-293 cells that transiently express vPK was used as a positive control for vPK expression. () Southern blot of WT, vPK1, and vPK2. DNA was isolated from the spleens of WT and vPK lines 1 and 2. D, double digest with HinDIII-HF and BamHI-HF; S, single digestion with AFlII; p-vPK, plasmid Ub.vPK.hGH.