The remarkable regeneration capability of skeletal muscle depends on the coordinated proliferation and differentiation of satellite cells (SCs). The self-renewal of SCs is critical for long-term maintenance of muscle regeneration potential. Hypoxia profoundly affects the proliferation, differentiation, and self-renewal of cultured myoblasts. However, the physiological relevance of hypoxia and hypoxia signaling in SCs in vivo remains largely unknown. Here, we demonstrate that SCs are in an intrinsic hypoxic state in vivo and express hypoxia-inducible factor 2A (HIF2A). HIF2A promotes the stemness and long-term homeostatic maintenance of SCs by maintaining their quiescence, increasing their self-renewal, and blocking their myogenic differentiation. HIF2A stabilization in SCs cultured under normoxia augments their engraftment potential in regenerative muscle. Conversely, HIF2A ablation leads to the depletion of SCs and their consequent regenerative failure in the long-term. In contrast, transient pharmacological inhibition of HIF2A accelerates muscle regeneration by increasing SC proliferation and differentiation. Mechanistically, HIF2A induces the quiescence and self-renewal of SCs by binding the promoter of the Spry1 gene and activating Spry1 expression. These findings suggest that HIF2A is a pivotal mediator of hypoxia signaling in SCs and may be therapeutically targeted to improve muscle regeneration. 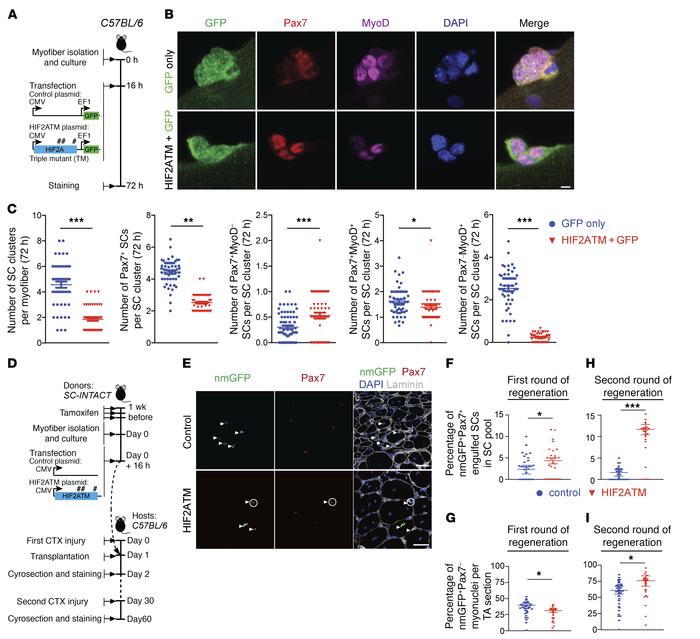 () Diagram depicting the timeline and plasmids used for HIF2A stabilization in normoxic SC culture. Pound signs denote the number and locations of point mutations in HIF2ATM. () Representative images of transfected (GFP+) SC clusters on myofibers from mice ( >50 myofibers from 7 mice/group). The SC clusters were transfected with either HIF2ATM or control plasmids and stained for Pax7, MyoD, and DAPI. Scale bar: 5 μm. () Number of SC clusters, Pax7+ SCs per SC cluster, and Pax7+MyoD–, Pax7+MyoD+, and Pax7–MyoD+ SCs per SC cluster ( >50 myofibers). () Diagram of the experimental scheme for transplantation of HIF2A-stabilized SCs and tracing of their cell fates in vivo. () Cross-sectional images of TA muscles that were transplanted with HIF2ATM- or control plasmid–transfected SCs ( = 5 mice/group; 21 days after the first injury). Immunofluorescence of Pax7 and nmGFP revealed 2 fates of transplanted SCs: engrafted SCs that retained stemness (nmGFP+Pax7+; circles, bottom) and engrafted SCs that differentiated into myonuclei (nmGFP+Pax7–; arrowheads). Scale bars: 20 μm. ( and ) Percentage of engrafted and self-renewed nmGFP+Pax7+ SCs in the total SC pool after the first round (21 dpi; = 5 mice/group in ) and second round (30 dpi; = 6 mice/group in ) of regeneration. ( and ) Number of nmGFP+Pax7– differentiated myonuclei per TA muscle section after the first round () and second round () of regeneration. * < 0.05, ** < 0.01, and *** < 0.005, by 2-sided Student’s test. Data represent the mean ± SEM.