The alternatively spliced products of , lamin C and prelamin A (the precursor to lamin A), are produced in similar amounts in most tissues and have largely redundant functions. This redundancy suggests that diseases, such as Hutchinson-Gilford progeria syndrome (HGPS), that are caused by prelamin A–specific mutations could be treated by shifting the output of more toward lamin C. Here, we investigated mechanisms that regulate mRNA alternative splicing and assessed the feasibility of reducing prelamin A expression in vivo. We identified an exon 11 antisense oligonucleotide (ASO) that increased lamin C production at the expense of prelamin A when transfected into mouse and human fibroblasts. The same ASO also reduced the expression of progerin, the mutant prelamin A protein in HGPS, in fibroblasts derived from patients with HGPS. Mechanistic studies revealed that the exon 11 sequences contain binding sites for serine/arginine-rich splicing factor 2 (SRSF2), and knockdown lowered lamin A production in cells and in murine tissues. Moreover, administration of the exon 11 ASO reduced lamin A expression in wild-type mice and progerin expression in an HGPS mouse model. Together, these studies identify ASO-mediated reduction of prelamin A as a potential strategy to treat prelamin A–specific diseases.

ASOs lower lamin A levels and reduce the frequency of nuclear shape abnormalities in HGPS fibroblasts. 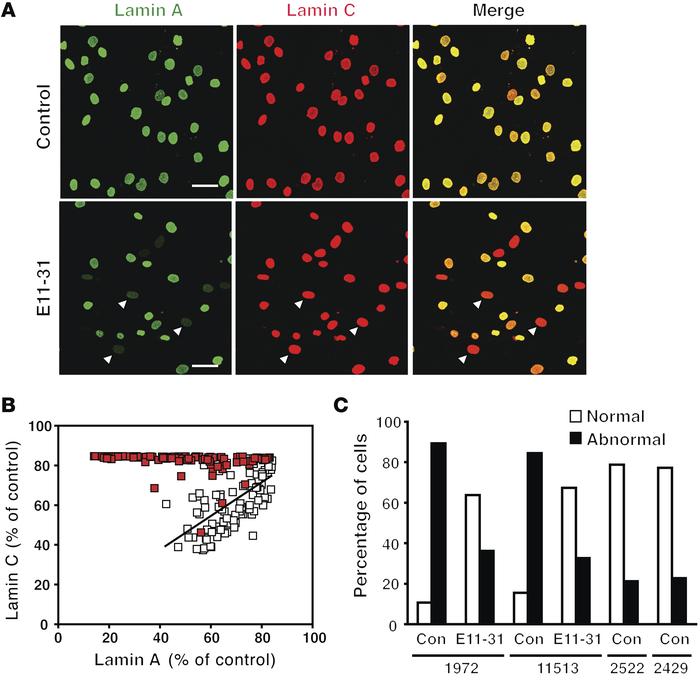 () Immunocytochemistry showing increased numbers of cells expressing more lamin C than lamin A after ASO E11-31 treatment. Human HGPS fibroblasts (clone 11513) were transfected once with ASO E11-31. After 5 days, the cells were processed for immunofluorescence microscopy with a lamin A antibody that binds lamin A and progerin (green) and a lamin C antibody (red). Cells transfected with a scrambled ASO served as a control. After transfection with ASO E11-31, lamin A expression was markedly reduced in many cells (arrowheads). Scale bar: 50 μm. () Quantitative measurements showing a higher number of cells expressing more lamin C than lamin A in ASO E11-31–treated cells. Control ASO–treated cells (white squares) expressed approximately equivalent amounts of lamin A and C. After ASO E11-31 treatment (red squares), there was an increase in the number of cells that expressed more lamin C than lamin A. Lamin C levels were scaled to the levels measured in control cells; thus, the highest levels for lamin C were limited to approximately 85 percent. () ASO E11-31 reduces the number of abnormally shaped nuclei in HGPS cells. Evaluation of nuclear shape after transfection with ASO E11-31. Two HGPS fibroblast cell lines (clones 1972 and 11513) were treated once with ASO E11-31 or a scrambled ASO. After 5 days, nuclear shape was assessed by two observers blinded to treatment group ( = 2 per group).